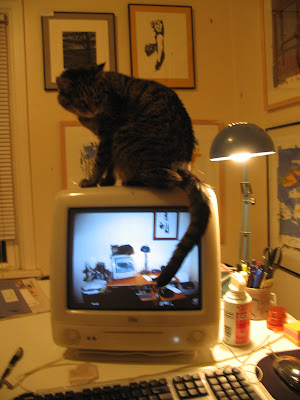 I love this time of year, as the days brighten a bit. It's also a good time for a fresh start in the studio, and I plan on some sketchbook time with new ideas later. I'll post some of these, as well as work from the end of 2010. But first, I'll wrap up some recent posts.

My "techie week" went pretty well, all things considered. Launched a FB page for the soccer supporters group, and took over the Twitter account for the gallery. I realize this is simple stuff for the generation that doesn't remember lp vinyl, but it's a somewhat slow process for one who remembers watching the Kennedy Inaugural on b&w TV. Social media come with a new learning curve, but I also need to clear the decks for the ancient technology of making monotypes.

New media are important business tools, but spending a lot of time on them to the detriment of studio time is frustrating. However, the only real way to smooth the learning process of marketing in social media that really works is to just jump in and do it. it isn't so surprising that those of a certain age didn't realize that making art was a business when they started. But many of us now realize that making art without a Facebook account these days makes about as much business sense as making pizza without a delivery truck. I secretly suspect some in my age group of pooh-poohing these new media simply because they know the learning curve will be steep. And it is.

Then each new medium seems to open up a whole host of other tech mysteries. One finds many eager to compare notes on the head spinning profusion of new technology. My neighbor is an architecture professor at the University of Colorado at Denver. Because there is online teaching involved, he's had to become familiar with certain Open Source applications and Wiki technology (with the help of University IT, he was thankful to say). My brother also extolls Open Source, which he uses for animation and e-publishing. I've enjoyed several Wiki's related to one of my favorite authors, Pynchon. It's all intriguing stuff. But my initial reaction is much like Popeye's after one of those spinning Bluto roundhouse rights: aigetty, aigetty!

I'll continue to tinker with the Facebook page, and you can also find me on Twitter. One of the biggest challenges for me is learning how to keep the posts regular and substantive. But now, the library wants their "Facebook Marketing for Dummies" book back, and it's time to carve out a little time for a technology I'm familiar with, pencil and sketchbook.