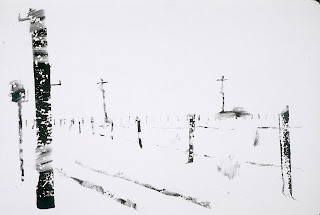 National Novel Writing Month is November, and I signed up to pledge my 50,000 words, like thousands of others. Is that why I haven't been posting here? Well, no. Turns out I'm just as bad at regular fiction writing as I am at regular blogging.
But here, just to get the ball rolling again, is an excerpt from the very rough draft of my "novel", an exclusive peek that is sure to go viral. I'd like my Nobel Prize in chocolate, please...
My Empty

What he actually thought he might see when he got to this point, he has no idea. Right now, what he does see, out through the cracked and fogged windshield, is nothing. An infinity of shifting white nothing. A swirling, thickened, distance-less nothing, a palpable absence of form and light made weirdly tangible in the failing grey afternoon only by the flakes that float, lift and corkscrew into the one operational headlight the old truck has. Out beyond the cracked and rattling side mirror, scrims of white flakes, sometimes parting, but only to reveal more flakes, moving in all directions, tiny inscrutable dramas of gravity and physics being played out, all according to stage directions unreadable to him.

He grips the wheel too tightly, without any sense of purchase or direction on the pavement, only a greasy gliding sensation. The tires aren’t that good, and he tells himself that relaxing his grip on the wheel, breathing deeply and gradually slowing down, will keep the worn rubber and drafty metal on the road. Just go with it, he tells himself. But he cannot shake the claustrophobic sense of dread that has gnawed and chilled him in this heater-less pick-up since Kearney.

It was then, he’d finally known that he was not home anymore. Home was back there, not a memory yet, nothing so real as that; yet omnipresent, though suddenly ephemeral and hazy, though he’d never left it before. He resolved to stop thinking about it.

Past Kearney early this morning, not thinking about home, then past Cheyenne. Its flat metal buildings and jumbled, fenced enclosures of junk cars, farm machinery, dessicated wooden relics of some sunny past, Interstate detritus beneath impossibly tall truck stop neon and dust blown gray asphalt, clustered and defending against... what? Outside the gray concrete ribbon with its halo of fast food trash, rolling sage of an almost blue/green against the dun ochre, cresting and troughing without definition, held, it seemed, only by the occasional blasted barbed wire fence, pinned tenuously, almost randomly to the Earth, though of course it was “earth”, but of a sort that didn’t seem to amount to much. Clouds appeared in the endless sky and suddenly overtook the sun. Cadres of fluffy white chargers stretching limitlessly into the distance, now thickening and turning gray, and soon he knew what it must be like to stare into the teeth of a vast and violent horde, seeing clearly your fate. Welcome to oblivion.

Rock formations now appeared on the ridge, squat and hunched like beaten soldiers, as the gray upon gray clouds, steel colored clouds, torn and ragged in the hoarse wind, rolled into the dun colored canyons and stunted blackened evergreen scrub, shearing off the tops of the mountains and blurring whatever features in the landscape the wind had not scraped away or turned flat and faceless. An unforgiving nothing.

The truck chugs up a long grade. There are a few other cars whirring past, rushing to warm places trying to beat the storm. Lights are sparse and receding as the buildings and cars grow fewer. A fat snowflake, then more. He is in the teeth of something, and doesn’t know where he even is, though of course he is not home.

The vast and meaningless landscape now closes around him, tethered to concrete, navigable reality only by the withered barbed wire fences and split, crone-like posts that recede grayly into the chill void. Another vehicle, lumpish and ghostlike, leaves a double furrow ahead. Its tail lights glow pinkish. Telephone poles slide by at measured intervals, carrying into the lowering darkness messages unheard, the whispered trivia of strangers, uncomfortable silences. As the tailights disapear, he finds the poles to be his only anchor in reality. The truck whines and gnashes through the icy slush, then seems to breathe and to settle in. he takes his foot off the accelerator. They are at the summit.

It is dark now and silent. Agitated luminescent flakes part and veer away into the blackness behind him. He downshifts carefully, feeling a slight swerve as he does, a loosening of discernible intention, a failure of control. Like a hurtling missile, he is without purpose, really. The trajectory has been pre-measured and between theses steep canyon walls, swooping from left to right gingerly in long switchbacks, his path is no longer under his control. He is floating, weightless, part of an object without sentience or compassion, a missile bound to the end of its arc, from whatever weird impetus put him on this road, toward whatever lay at the bottom of this steep descent. His momentum is palpable, thrilling, lethal.

Swirls of dry snow rise from the wheel wells, ghosts of whatever silent trackless gradient existed before he hurtled through.

Then there is a black spot, and another, hissing wetly as his wheels hit. He dares not antagonize the brakes until another, larger one appears and then a stretch of liquid glistening pavement and he slows, and the road clears, the grade softens, and behind a long looping curve and the steep black silouhette of a hill are the occluded lights of a medium sized town, glowing vaguely through the storm, a long way away still, but he’s off the mountain and rescued from his terrible momentum and calmed down enough to reach for a cigarette and he thinks about a beer.

The memory of her voice, bodiless, separating itself from the whining tires in the road hiss.

“My dad went through there once. There’s nothing there.”

White letters on a green reflective sign. A place name he’d seen in a western movie, then never troubled himself about again. Well it would have to do. It wasn’t where he’d intended to stop, but it would be home for tonight, wherever it was. He slowed and the first billboard appeared, then fences again, rusting agricultural metal in the darkness. An empty parking lot by a shut down road house, and then a giant cowboy, white, yellow and pink neon reflected in mercurial rivulets in the wet asphalt, tipping a blue cowboy hat in the air, then replacing it on his blue-haired head then tipping it again. "Howdy! You’re at the Ranger, where the West begins! Vacancy."

“Howdy,” he mumbled through the cigarette filter, then cranked the wheel into the lot, and coasted up to the bar.