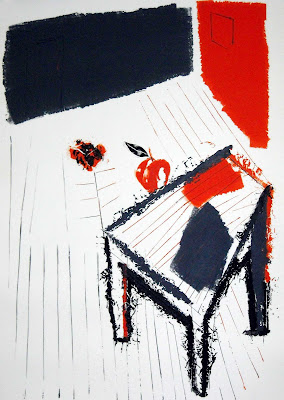 I remember being bored at times back in January/February, when it too cold to go out, and I would prowl through the shelves looking for something new to read, or re-read. Now, in wet, gray April/May, with the workshop, and the show at Open Press (opening tonight!), boredom is not a problem. It's been a bit frantic. Tonight, starting at 6 pm,  it starts getting fun again. Crocus-pocus !

People who find yakking about art entertaining should try yakking about their own art. People are not afraid to be blunt, as in: "What were you thinking?" In many cases, I WASN'T THINKING AT ALL, which to me, is part of the point of art. In this picture, "Interior with Absence", above, with its minimal structure and distressed imagery, I intended to evoke the fleeting feel of time past. Once highly anticipated events that are now dim in the memory. Do those people with the funny haircuts and our social security numbers even exist? And what of those who are gone? What creates their strange hold on the emotions?

Which brings us back to boredom, itself a form of absence-in-waiting. With two upcoming First Fridays and a Saturday demo, as well as the workshop and ASLD Summer Art Market, boredom isn't likely to have much of a hold on me. 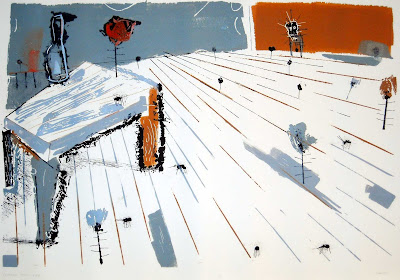 Not sure how I ever found time for all this stuff with a day job! April is always a little frantic compared to the winter months, though.

My monotype workshop at the Art Students League has definitely taken up some hours in prep time, for sure. The artists themselves are very fun to work with; a very lively group that doesn't mind having new stuff thrown at them, and responds with a spirit of adventure.

I've been doing some odd jobs to earn extra cash, and taking care of HOA business, too.

Lastly, I'm still making new work, in advance of a small show at Open Press' front gallery. This opens up April 30, and I'll post an event info page on my Facebook Page soon. If you would like to receive these sorts of announcements as a reminder on your computer, just click the link, then click "like".

Under the Big Sky 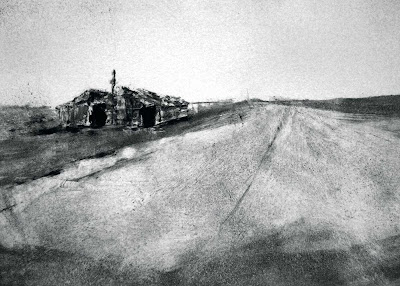 Above, a nice landscape by Ron Zito, from my monotype workshop Tuesdays at the Art Students League. Ron hasn't done a whole lot of monotypes, but is an accomplished painter, and he understood immediately that gesture and atmospherics will get you a lot more when working with ink on paper, than detail. I wish I could show you the subtle texture he got in the sky better than this snapshot, I think it makes the print. We had some other nice landscapes, and I'll post again soon, but several artists chose to work in abstract, and I've got a small portfolio of those here.
Posted by hggns at 2:04 PM No comments: 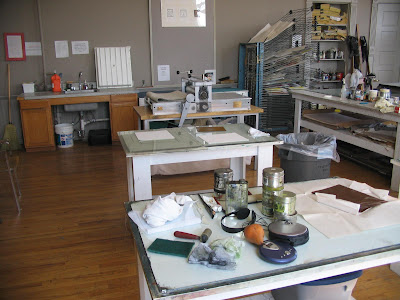 The Grant Street School ( above, now the Art Students League) is a Richardsonian Romanesque building not far from the Mayan Theatre. It may have been designed by Edbrooke, I will have to check on that. When I arrived in Denver in the 80's, it had already been decommissioned by DPS and was being rented out as Artists' studios. I remember visiting many of my friends there- Mark Friday, Jill Hadley Hooper, Phil Bender, Meg Ingraham. I remember sitting in Jill's studio, drinking beer and blasting the Pixies and Wolfgang Press.

The Art Students League had started in the same Victorian commercial building downtown where Open Press first began (and I began making monotypes). Then they bought the school.

The first day of the workshop was very fun, and it went fast. It's not easy to anticipate all the little issues, and I didn't. Next time I'll be better prepared, and the demo won't take so much time, and there will be more time for basics like paper-tearing, plates and of course, hands-on printing.

Everyone seems very nice, and most seem to be at least somewhat familiar with printmaking basics. There are eight peeps, which is more than I can remember ever teaching. Most are my age (-ish). I anticipate a lively eight weeks. We did get some prints done, but I got talking (go figure), and forgot to take pictures. Next week. I'll post the demos too, and I bet there are some interesting progressions there, since already I can feel a renewed curiosity about things I used to do, and moved away from.

Boy, I sure was beat after that, so I hung out on the couch and watched some bike racing, then I took a nap. It felt great to have the first one under my belt, after so many months of waiting. 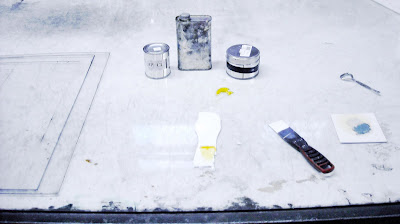 The first class will feature an introduction to my thinking and philosophy about the obscure medium of monotype, as summed up by the workshop's title: Spontaneous Graphic Textures. That is, many seem to approach monotype as a painting or watercolor, but the process seems capable of so much more.

I'll do a demo that emphasizes the amount of different textures that can be gotten in the simplest image, using the simplest tools.

We'll start making prints right away, thanks to the utter simplicity of monotype as compared to the technical processes of etching and lithography. You can put ink on a plexiglas plate (above) and run it through the press right away. The key is how much ink you apply, so that simpler ways of applying it seem appropriate the first day. For example, rollers ( brayer) apply ink in a controlled, even manner. Yet the many ways you can apply, then distress or texture the ink on the smooth plate allows for a lot of unique imagery. Sometimes, what you take out of a monotype is as important as what you put in.

Wish me luck, and I will try to get some student work to post at some point, if they are willing.